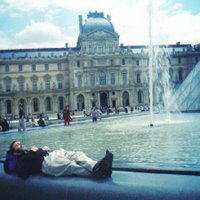 I finally finished digitizing Dave Lieber's music, made the CDs, and got them off in the mail to him today. I spoke to Dave on the phone last year and he was saying that he no longer had recordings of any of his music. Luckily for Dave, he sent me copies over the years and I still had them. He actually had a recording of the first time that the two of us jammed together in the winter of 75/76. What a hoot it was to listen to it again. We've both come a very long way since then (musically & spiritually). My favorite tunes were "Tiananmen Square" and "Ride on the Wings of Heaven".

In the final years before his marriage Dave was writing and recording like crazy. I can hear the influence of Steely Dan in his songs. He was hanging out with a bunch of very talented Hasidic Jazz musician's (no gigs on the Sabbath) at the time. They played at his wedding, which was without a doubt the best wedding band that I have ever heard. They would start off playing these Yiddish folk songs that would melt in to improvisational Heaven. I stood there and listened until his friends pulled me into the dancing circle. Shots of vodka and guy's lighting their hats on fire while they danced. I had a great time until my wife made me leave. It was an Orthodox ceremony and she was "insulted" that the women were separated from the men. Some people just don't have any respect for other people's cultures. I think it's fascinating and have always enjoyed learning about customs and cultures. RESPECT is the key to getting along. If we all showed each other a little more of it there would be no hatred or war.

It is always worthwhile to surround yourself with musicians that are better than you are. It improves your instrumental chops and writing. My philosophy is that I want to be the least talented musician in my band.

I asked Dave if he would allow me to make a web site for him and post some of his songs on Barnyard Sounds. Hopefully he will agree so you can all hear my talented friend.

Be good...
Posted by John Spreier at 6:20 PM No comments: Links to this post I was listening to NPR (All Things Considered) on Wednesday and they reminded me that Bob Marley died on 4/20 at 4:20 PM. The news motivated me to play some Marley so I went to Twisted Sisters and jammed with Zach (guitar), Mathew (drums) Jared (bass), and a lovely woman named Brandy (djembe). I sang and provided the acoustic guitar skank on Lively Up Yourself, Stir it Up, No Woman No Cry, and Redemption Song. I sat in with Brandy on her set of four original tunes after my set keeping time with my djembe while she strummed the acoustic and sang ever so sweetly. It was great playing with Zach again and a pleasure meeting Brandy, Mathew, and Jared. I drank some Guinness and received a neuromuscular massage to boot. It was a wonderful evening.

I originally wrote "Sail Away" for my mentor Jon Jelleyman when he passed away but it's posted here for Bob (Jelley would understand):

Sail away...I'll be leaving someday.
You know I believed it, Oh for so long.
Won't be long 'till I'll be saying so long.

Far away...I'll be there someday.
You know I believed it, Oh for so long.
Won't be long till I'll be saying so long.

He's away...He won't be back someday.
You know I believed in him, Oh for so long.
Won't be long 'till I'll be saying so long.

Be good...
Posted by John Spreier at 3:41 AM No comments: Links to this post

The best Easter ever Well Lent is over and the Passion has played once again. I'm going to miss playing the guitar at Bethlehem for the "Holden Evening Prayer". I went to all of the services this week beginning with Palm Sunday's celebration, Wednesday's Seder meal service, Maundy Thursday's stripping of the altar, Good Friday's Tenebrae service, Saturday's powerful Easter Vigil service, and Easter Sunday's Resurrection service. It was spiritually fulfilling. The Easter bunny didn't make an appearance but the Holy Ghost did.

Meanwhile back on Earth 2318 American soldier's have died, more than 10,000 American soldiers have been wounded, 314 contractors have died, and approximately 35,000 Iraqi's have died because of DicknBush's war. They have spent over two hundred and seventy four billion of our tax dollars so far (thanks for the tax cut fellas) and plan on spending as whole lot more before they're done with their bloodbath. Dubya is a born again Christian? What Bible has he been reading? I'm guessing that he's a really slow reader and must still be on the Old Testament (an eye for an eye). I can't wait till he gets to the New Testament (forgive your enemies). Unfortunately it may be too late for all of us by then.

Be good...
Posted by John Spreier at 1:56 AM No comments: Links to this post

Days of the World I can't sleep despite the fact that I'm tired. I think it's daylight savings time. When Ben Franklin came up with the idea it was before the advent of electricity. His idea was to have more daylight hours to increase productivity. I'm not sure why we still do it. It messes up our internal clock.

I was busy this morning digitizing the music from a project called "Endless Summer" that I completed in the nineties. The songs will actually be released on a couple of different albums: "From a Voice Within" and "Memories in Boxes". "Endless Summer" will be an album of my reggae tunes. My favorite song from the project (today) is one called "Days of the World"...

Got to find a solution, searching everywhere
Turning every corner, leaving nothing spared
Trying every angle, put on different shoes
Tried all different phases, nothing left to choose

Eyes are closing down now, mind is getting tired
Still I must search but how, the information's wired
It's plugged and prime processing, done in half the time
My minds a sleek computer, my bodies still confined

State of mind is conscious, body's off of line
Senses are receiving, dream's a state of mind
Oh my heart is restless, locked inside this mind
It's sometimes overwhelming, when I've got the time

It must be true because that's how I feel right now. I think I'll try and get some sleep now.

Be good...
Posted by John Spreier at 2:55 AM No comments: Links to this post

The start of something new... I was searching the net for people that I know this afternoon. I do that from time to time to see if anything new has happened while I was sleeping. When I searched for Tony Miceli I came up with Tony Miceli's Gigs. This was a new listing for Tony and I was intrigued. "Perhaps it's time for Barnyard Sounds to have a blog", I thought. "I'm putting the rest of my musical life up there for all to see, why not a continuing diary of sorts." Well, this is it. I figured if it's a good place for Tony to put his gigs and thoughts it's good enough for me. I'll try to keep it interesting and maybe it will encourage me to do things that are worthy of posting.

Be good...
Posted by John Spreier at 3:45 PM No comments: Links to this post